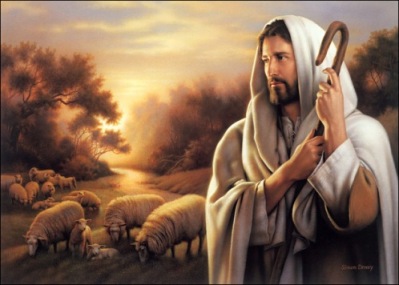 The most frightened shepherd that night was little Ladius, just ten. He cowered behind his three older brothers when the blinding star lit the hillside. When the angel appeared, he hid behind a huge rock.
Yet after Ladius heard the glad news, fear left him, and he limped back to his brothers, who were planning to set out for Bethlehem.

“Who will tend the sheep?” asked Samuel, the oldest at sixteen. Ladius, leaning against his shepherd’s crook to support a crippled foot, volunteered, “I’d only slow you down. Let me stay with the sheep.” He wet his lip as he talked. The brothers weakly protested at first, then made plans to go.

“We must each take a gift,” said Samuel. One brother chose his flint to start a fire for the Christ child. Another picked meadow lilies to make a garland for the king. Samuel decided on his most precious possession–his gold ring.

“Here–take my blanket to him,” said Ladius. It was badly worn, a faded blue with patches.

“No, Ladius,” said Samuel, tenderly. “The blanket is too tattered to give even a beggar–let alone a king. Besides, you will need it tonight.”

The brothers departed, leaving Ladius alone by the fire. He laid his head upon the blanket and buried his face in his hands. Tears forced their way between his fingers, but soon the hush of night soothed the boy’s heartbreak. The world in silent stillness lay.

“Are you coming, Ladius?” called a voice. Standing nearby was the same angel who had brought the news. “You wanted to see the child, didn’t you?”
“Yes,” nodded Ladius, “but I must stay here.”
“My name is Gabriel,” said the angel. “Your sheep will be watched. Take my hand, and bring your blanket. The child may need it.”

Suddenly, Ladius was outside a stable. Kneeling by a manger were his brothers. Ladius started to call out, but the angel lifted a finger to his lips.

“Give me the blanket,” Gabriel whispered. The angel took it and quietly covered the baby. But the blanket was no longer faded. Now it glistened like dew in the brilliance of a new day. Returning, Gabriel squeezed Ladius’s hand: “Your gift was best, because you gave all that you had.

“Wake up, Ladius, wake up!” The boy rubbed his eyes and tried to shield them from the glaring sun. Hovering over him was Samuel.

“Did you find him?” asked Ladius.
“Yes,” replied Samuel, “but first tell me why you were sleeping without your blanket.”

Ladius looked about with wonder. The faded blue blanket was nowhere to be found–then, or thereafter.