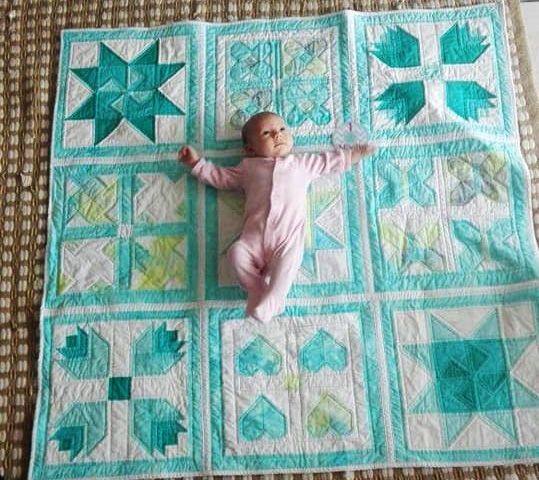 Jesus taught:
“Suffer the little children to come unto me.”

A few days before Wes was born, I weighed 76 kg’s, despite having lost weight during the first few months of my pregnancy. The day I went home with Wes, I weighed about 70 kg’s. When Wes was 3 weeks old… I weighed about 64 kg’s and breastfeeding was proving to be a nightmare that no one warned me about.

I had piranhas chewing my insides as my uterus contracted at each feed, that was absolute agony, and that pulled against the healing caesarean wound and stitches… that not one person told me about.

I had cracked nipples that bled… real blood, and that sometimes took hours to stop bleeding as I have haemophilia… that no one warned me would happen, and sometimes didn’t stop bleeding before the next feed.

I had engorged breasts that were incredibly painful, that were only relieved by hot cabbage leaves, that made me smell like… well not very pleasant. Of course it couldn’t be ‘vanilla pods’ or ‘magnolia petals’ or even ‘spinach leaves’ …it had to be cabbage leaves… not that I have anything personally against cabbage… I love cooked cabbage and onion and coleslaw is one of my favourite ‘foods’. *Smile*

And then, first I was feeding every 3 hours… then every two hours and then more frequently… and when Wes was six weeks old, I weighed 54 kg’s.

Great for my figure and self-esteem… terrible for breastfeeding, healing and energy.

And of course with the more frequent feeds came the less frequent sleep.

I couldn’t believe how exhausted I was… and that my mom who had extolled the virtues of breastfeeding, and not mentioned a single problem I’d had… left the country and went to work in Maun, on the Okavango Delta… where there was only one phone line for the entire region, and impossible to get through to.

I cried on Dave’s shoulder… who took me to see my Gynae, and in unison we agreed I was done breastfeeding, and Wes got a bottle, and I had my first night’s sleep in six weeks, as Dave graciously fed Wes through the night.

Our bliss lasted a few days… and then Wes had ‘reflux’ and ‘colic’… and he would start crying between 2:00pm and 4:00pm… for about five to six hours.

None stop crying, no matter what formulas we tried… and even though I rocked him and held him and soothed him constantly.

This went on every day, for more than 7 months.

There were some blessings. *Smile*

We found a disgusting looking… disgusting smelling baby formula that Wes loved, and that he thrived on.

Despite the hours of colic and crying, Wes slept through the night from about 9:00pm to about 5:00am in the morning, which meant I slept… and he woke up gurgling and happy, which meant I woke up happy and relaxed. *Smile*

When Wes was about four months old, Dave was transferred to Welkom in the Freestate, and we went to live in a lovely little town called Heneman. Dave received an increase and some paid expenses, and I got a domestic five days a week… who was happy to help with Wes for a couple of hours of his colic crying, before she left for home, and then I would carry Wes for two or three hours before Dave arrived home to relieve me.

We discovered Wes loved the car, and he would happily go in his car seat with a bottle, and stop crying a few minutes after Dave started driving… giving me an hour to have a break and cook supper.

As his mom, I discovered it wasn’t so easy to handover my crying baby to our nanny, even though I would desperately need a rest, even for 10 or 15 minutes to calm my nerves, before I took Wes back to try and console and comfort him.

Often Wes would fall asleep on our Nannies back, however placing him in his cot would almost always wake him up… and then the crying would increase to hysteria.

It was on a desperate day, of holding and walking backwards and forwards and in circles… and rocking Wes trying to comfort him, that I was inspired to make a very large cushion… something like a poof.

I bought large chipped foam, and brightly coloured pieces of material… red, yellow, blue, orange, green and cut them in like large triangle pieces and sewed them together, that made what looked like a very large sphere filled with chipped foam that I was able to place Wes on top of, and as he gently sank, the sides would cocoon him… and he would sleep there for about 20 to 30 minutes at a time, next to my desk.

He loved it… and I loved it more. *Grin*

I finally had a little time, which I often used productively to relieve my stress, and regain calm… by colouring in adult posters, building puzzles and sewing.

I started with a room for Wes, making the curtains, cot bumpers and duvet cover all in rainbow bright material…. and a play blanket with a rainbow picture that I quilted, even though I didn’t have a clue what I was doing… I knew how to sew, and I just used the time creatively.

Wes loved his Rainbow Bright duvet cover and play blanket, that went everywhere with him, and which seemed to bring him great comfort.

Fortunately, because we then lived in a small town with three doctors who shared a practice, they were each willing to help and support us through four months of Wes having colic, and help us find a solution, which we eventually did. *Smile*

When Wes was about 10 months old, at the first sign of the colic, we’d get his ‘blankie’ and he’d curl up in my lap or on his giant cushion with his ‘blankie’ covering him and tucked around him.

It was only years later, when Wes was almost three, that he gave his ‘blankie’ to Jordy when Jordy started crying as a tiny baby, that I realised how much Wes loved his ‘blankie’ and how much comfort it had brought him… and how loving a gift it was.

Jordy treasured his beloved ‘blankie’ without ever knowing where it came from, until he was four years old, and it had been reduced to the size of a small square… and I was unable to wash it anymore, as it just disintegrated. *Grin*

Making baby blankets from squares that I’ve knitted, or sewing play blankets and baby quilts, is a treasured tradition that Jess has now continued, with beautiful baby quilts that she made and gifted this year as she learnt to sew. *Smile* 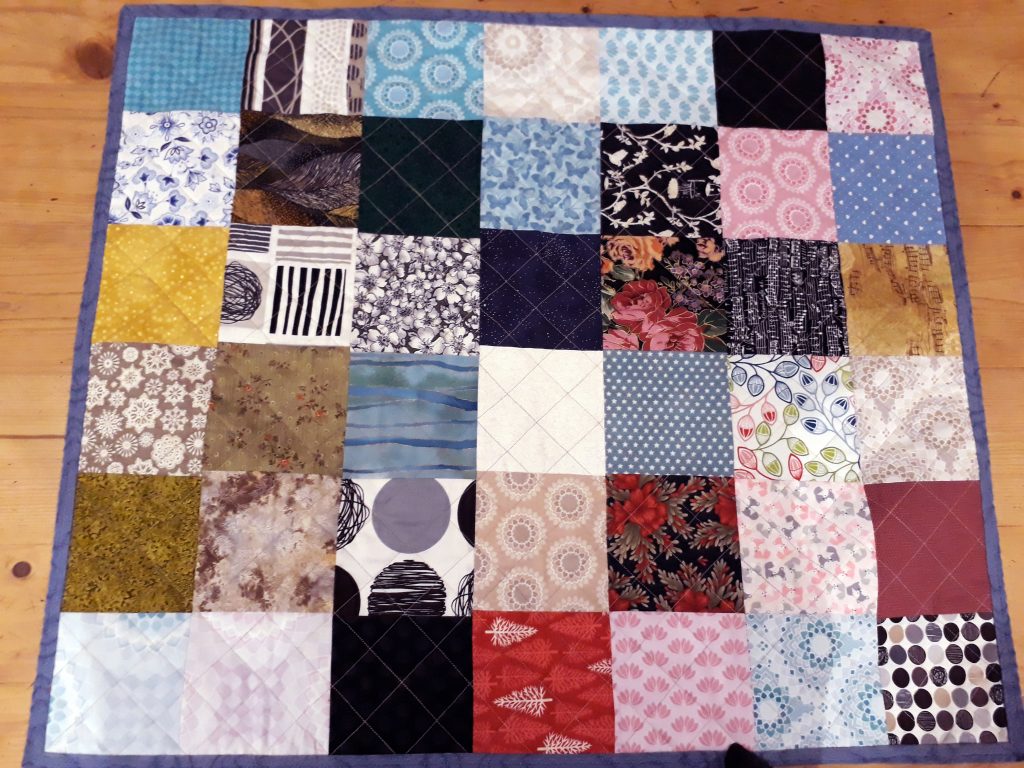 The First Baby Quilt Jess made… and the very first quilt she ever made, *Smile*
went to Sharon for Bridges of Hope for Children. 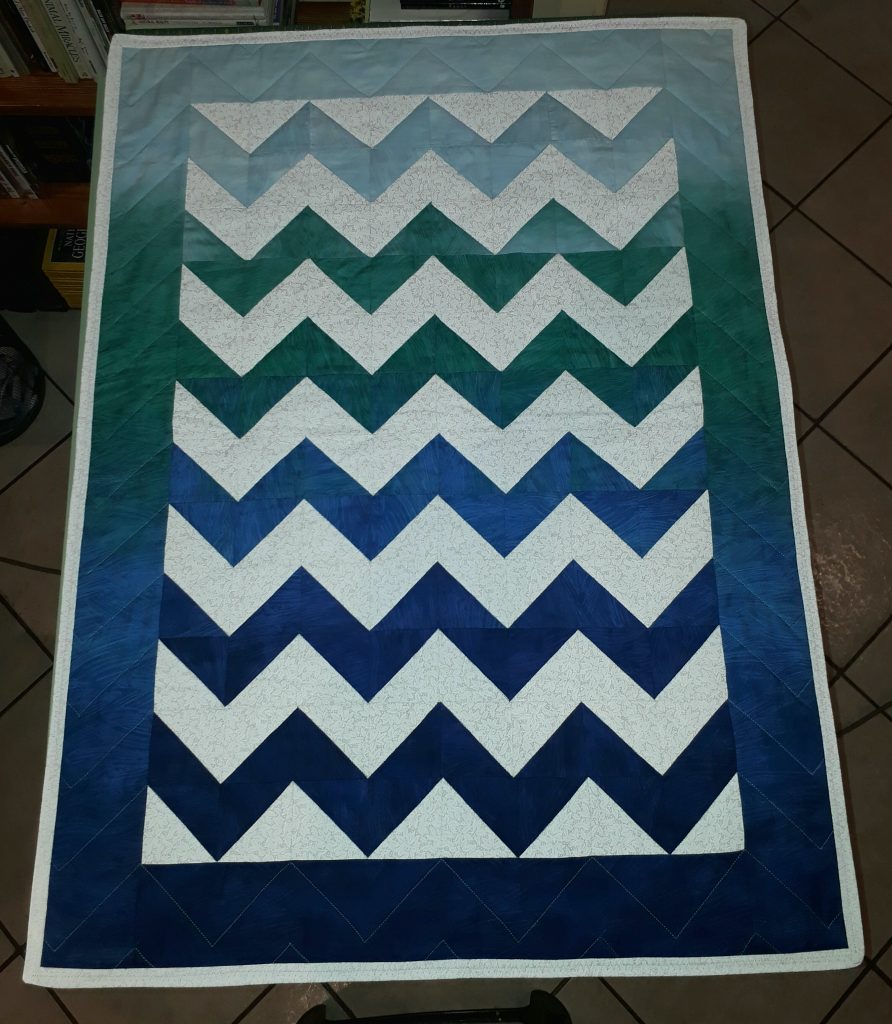 The Second Quilt that Jess made, was much more complicated and proved very challenging, however Jess loved the process of piecing the more intricate chevron design, and learnt a lot, while improving her sewing skills.  Jess made this Baby Quilt specifically for Stellah and Clemence, who were expecting their first baby… and every time we have seen Stellah with Baby Praise, she is wrapped in her quilt. *Smile* 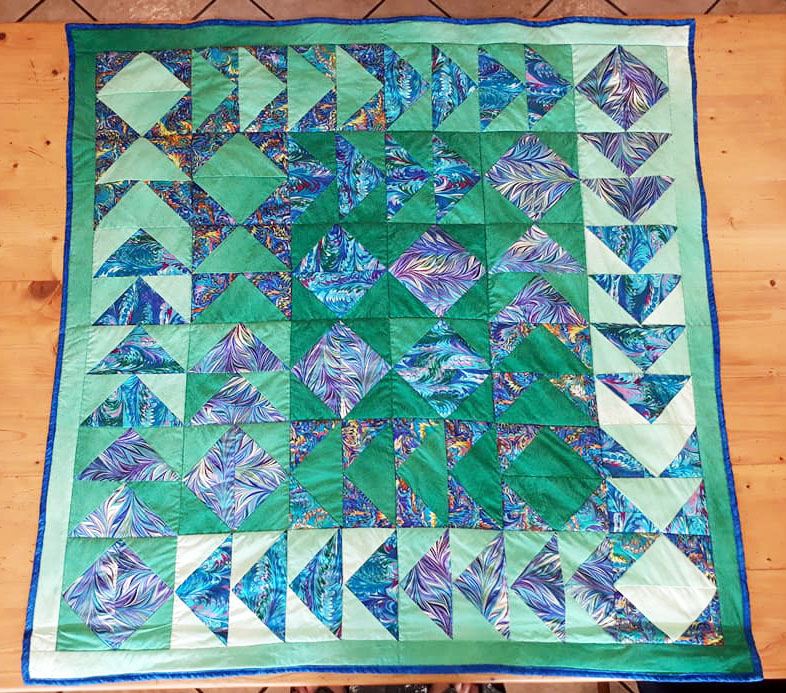 Baby Kholwani’s Quilt
The Third Quilt Jess made was very intricate
and is as pretty on one side as it is on the other.

I also upset Jess a bit when she first laid out the “flying geese” pattern, by saying it was boring and totally random… and we spent more time trying to figure out a pattern and laying it out, then it took Jess to sew it together… well it seemed that way. *Smile* I think it’s stunning and we called it “Under the Sea” which went to the baby of a friend… 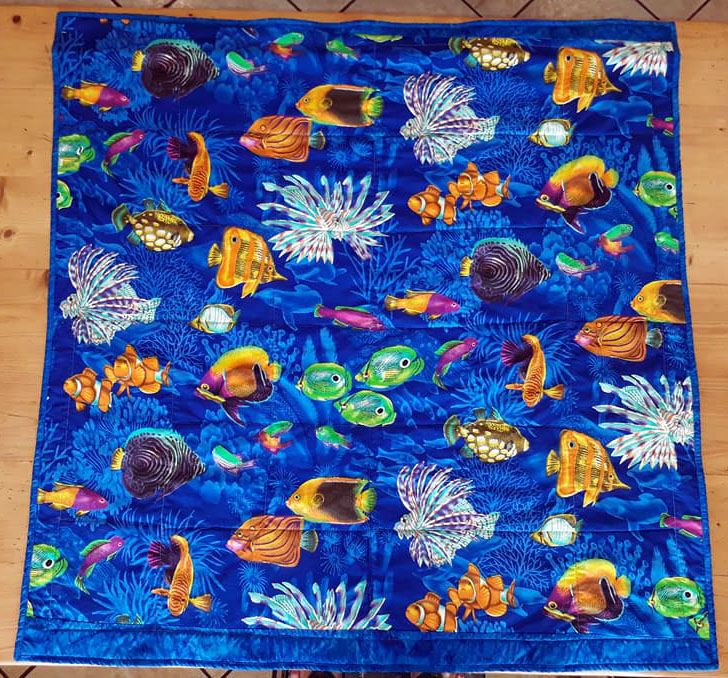 “Back” of Baby Kholwani’s Quilt “Under the Sea” 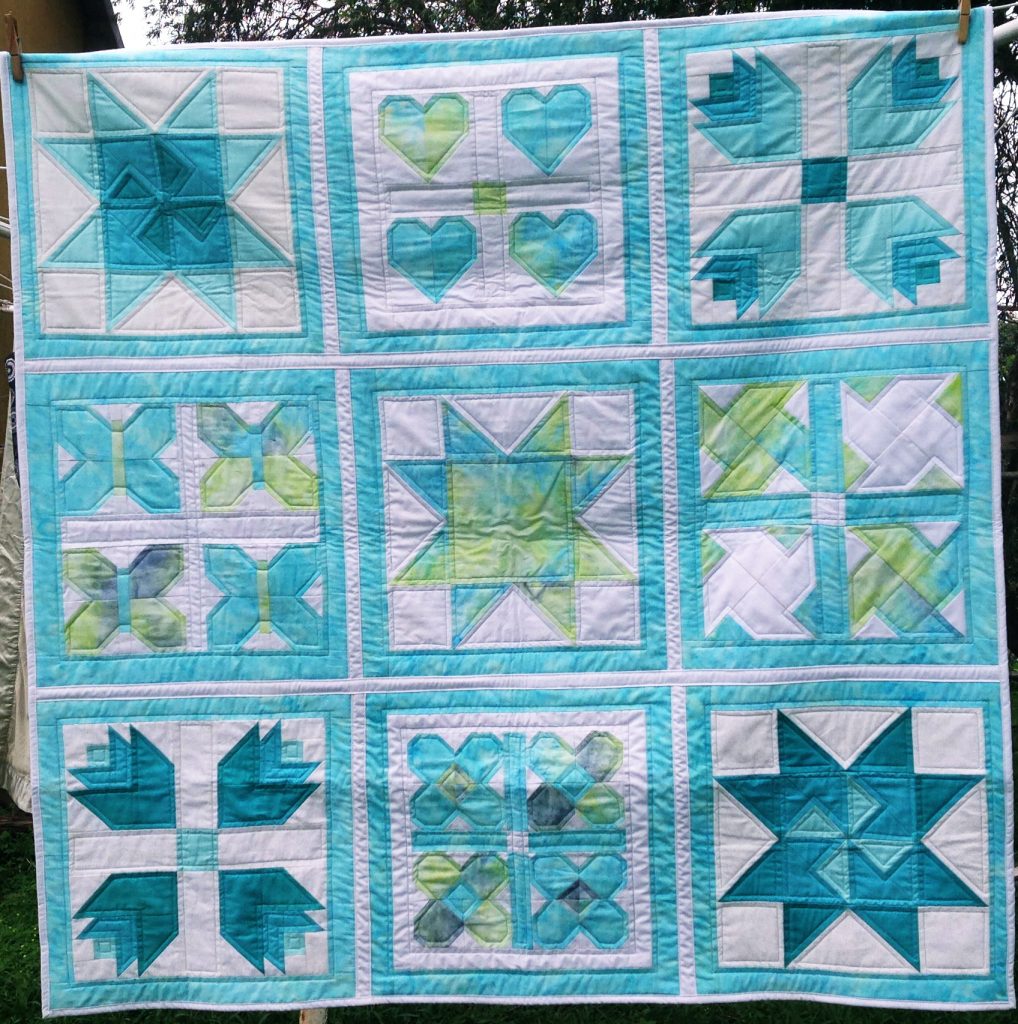 For Baby Jade’s Quilt,
Jess made her first “Quilt as You Go”
and simply had fun with lots of different patterns. 🙂 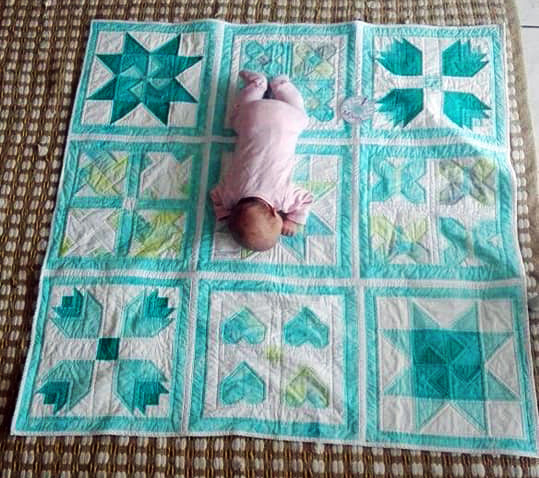 When my friend Clarrissa arrived at my gate, with two boxes of the most beautiful crocheted blankets she had made, with her only request being that they go to babies… our “Heart to Heart Bags” for New Moms & Newborns began.

We have been collecting from very generous family and friends, and friends of friends, *Smile* and have bags, boxes and suitcases of goodies. We still have more goodies that are waiting to be collected, and we’ll be sorting through the goodies during the first week of January 2018… and making up the first 11 bags by the middle of January… and hopefully going to give these during the following week. We have the bags with the Heat to Heart logo, so we can get started.

If you would like to contribute or participate, please let me know. *Smile*

PS… We moved at the beginning of December, and of course, the best laid plans go awry, and even my detailed planning made no difference to contractors in December 2017… so we are living amidst chaos and too few unpacked boxes, while we paint and get organised… and complete our Heart to Heart projects and service. *Smile* We’ll take photos, and let you know what we have for the Heart to Heart ~ New Mom & Newborn Bags very soon.

I do want to say, that I’m really grateful and so inspired by so many who have contributed, especially those friends of friends who I’ve never met.

Thank-you with grateful thanks and appreciation. 🙂